What Angle is your Fall Protection Good for?

Home  >>  Testing  >>  What Angle is your Fall Protection Good for?

What Angle is your Fall Protection Good for?

The testing program included two tests of the Chicago Clamp, Upper Deck Fall Protection Anchorage System.  The system consists of two 4” x 2” HSS sections with nominal wall thickness 1/8”, with clamps that attach to the top chord of an open-web joist.  The 4”x 2” HSS sections are arranged to support a safety harness tie-off.

For this testing program the Upper Deck Anchorage System was mounted on support fixtures that simulate the top chord of a truss with a 4:12 pitch plus a 15 degree fall angle (see Fig. 1). Applying a vertical load to the 4 x 2 system set at approximately 33 degrees (15 + 18 = 33) is equivalent to applying the load 15 degrees from vertical to a joist on a 4:12 pitch. Note that all loading’s were applied as upward loads to the specimens, so the specimens were mounted upside-down on a support fixture that simulates the top chord of a truss upside-down. 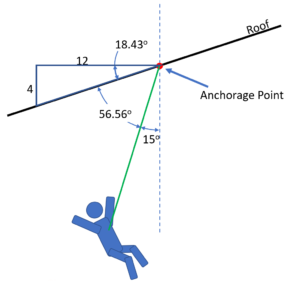 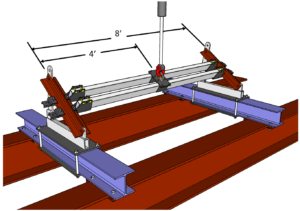 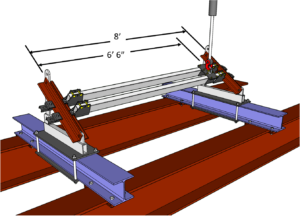 For both tests the specimens were loaded to approximately 300 lb, then unloaded to zero, and then loaded to 7000 lb.  Figures 2 and 3 show Specimen 1 and Specimen 2 sustaining load of approximately 7000 lb.  In both cases the Chicago Clamp Upper Deck Fall Protection Anchorage System sustained the full 7000 lb load with no obvious distress or damage, although there was some residual displacement which included slight shifting of the clamps on the supporting joists. However, the residual displacement did not appear to compromise the stability or load-carrying ability of the specimen. The force vs. displacement plots are shown in Figs. 4 and 5.